This page is dedicated to short descriptions of various collections in the holdings available for researchers at the CERLAC “Resource Center”. The collections described include the primary source materials that were donated to CERLAC by the Latin American Working Group (LAWG) that functioned from the mid-1960s to mid-1995 and the International Commission for the Coordination of Solidarity Among Sugar Workers (ICCSASW) that also functioned during the same period of time.

The Latin American Working Group (LAWG) collection, located in the CERLAC Resource Centre (6th floor, Kaneff Tower) contains a wide range of material on Canadian mining and other corporations and their investments in Latin America and the Caribbean (form the mid-1960s to the mid-1990s). The material is useful for the preparation of MRPs, MA and PhD theses, and research on Canadian mining and other investments in the region and also at home (e.g., INCO in Sudbury). Collected by LAWG for its own research on Canada’s trade, aid, and investment policies in Latin America and the Caribbean, these materials include:
• In-depth critical reports on corporate history and operations, by LAWG, NACLA, the Taskforce on the Churches and Corporate Responsibility (TCCR), unions, and others.

As an aide to research on corporations, LAWG published “A Guide to Corporate Research” (written by Bob Carty) in 1979. Also helpful for navigating the history of mining and other Canadian companies is LAWG’s publication on “Canadian Investment, Trade, & Aid in Latin America”, LAWG Letter, vol. vii, nos. 1-2, May-August 1981. An early example of LAWG’s work on corporate destabilization in Chile is its pre-coup publication, Chile versus the Corporations: A call for Canadian support, January 1973, published with the Development Education Centre (DEC) of Toronto.

Some of the especially rich collections on specific corporations include:

Most of the materials are in English, but depending on the location of the investment or a conflict, they may also be in French or Spanish.

The Latin American Working Group (LAWG) collection in the Resource Centre of the Centre for Research on Latin America and the Caribbean (CERLAC) houses a broad range of publications by exile organizations from twelve Latin American and Caribbean countries. The persecution of military dictatorships and the violence of civil wars generated waves of exiles who settled in other Latin American countries, in North America, and in Europe during the 1970s and 1980s. Although far from comprehensive, a rich collection of their publications can be consulted in the Resource Centre (6th floor, Kaneff Tower, York University). Below, we list the nationalities of the exiles and many of the locations where they settled and prepared broadly disseminated analyses about, and denunciations of, events in their home countries that are available in the Resource Centre. The exiles and the countries in which they published were:

In addition to the publications of the exiles themselves, the LAWG/CERLAC collections house the publications of Canadian solidarity organizations that collaborated with, and supported the various exile groups. To consult all these materials, contact: caese.levo@gmail.com or lnorth@yorku.ca

Among the collections available at the CERLAC Resource Centre are documents, newsletters, and other publications on Theology of Liberation and the social and human rights programs of the Christian churches in Latin America, the Caribbean, and Canada. They range from the 1960s to the late 1990s, and in a few Canadian cases include newsletters that come up to the present date.

The collection is organized alphabetically according to the country of origin of a publication, and then with reference to the name of the institution that issued it. Particularly rich collections can be found there on the region as a whole; on Central America (especially El Salvador, Guatemala, and Nicaragua); Brazil, Chile, and Peru, as well as Canadian church activities in, and relations with the southern hemisphere.

With regard to the region, the Section includes, for example, the publications of the Consejo Latinoamericano de Iglesias (CLAI) (1980-1997), the Maryknoll missionary organization’s LADOC (Latin American Documentation) (1977-1989), the Jesuit Social Justice Secretariat’s newsletter (1992-2008, when it became available on-line), and the Centro Nacional de Comunicaciones Sociales’ publication Iglesias (1981-1998).

With regard to specific countries, the Brazil collection includes, for example, the Servicio de Documentacao reports on church activities (1975-1985) and the reports of the Comisao Pastoral da Terra (1972-1982); the Chile collection contains a very large number of newsletters and reports from the Vicaría de Solidaridad (1978-1988), the principal human rights organization that was able to sustain activity during the military dictatorship; and the Peru section contains the various publications of the Centro de Estudios y Publicaciones (CEP).

The last area in the Church Section contains examples of Canadian, American, and International church solidarity with Latin America. In Canada, the Inter-Church Coalitions were an inspiring ecumenical model of church cooperation across denominations working for social justice. The mainline churches shared resources to support twelve coalitions. The Resource Centre has material from the Inter-Church Committee for Refugees (ICCR), the Inter-Church Committee on Human Rights in Latin America (ICCHRLA), the Taskforce on the Churches and Corporate Responsibility (TCCR) and GATT-FLY. The Coalitions operated from 1973 to 2000 when they merged to become Kairos: Canadian Ecumenical Justice Initiatives.

Of particular interest to Fellows who research extractive-industry related conflicts are TCCR’s annual reports. They summarize the activities of the Task Force and provide information on its interventions with reference to the operations of specific Canadian corporations in Latin America, the Caribbean, and Africa. 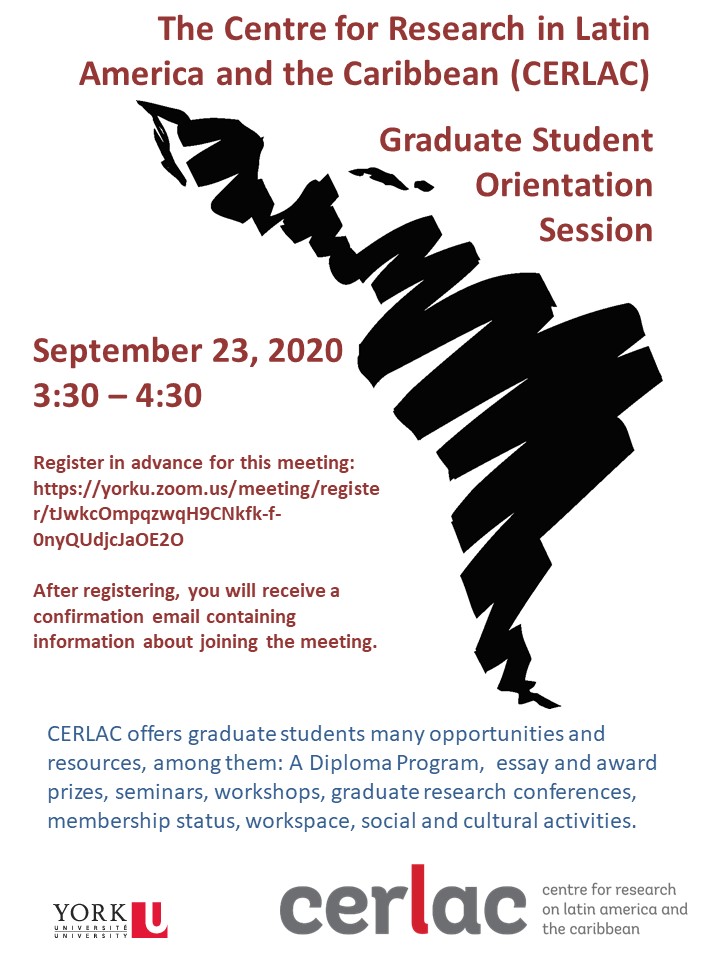 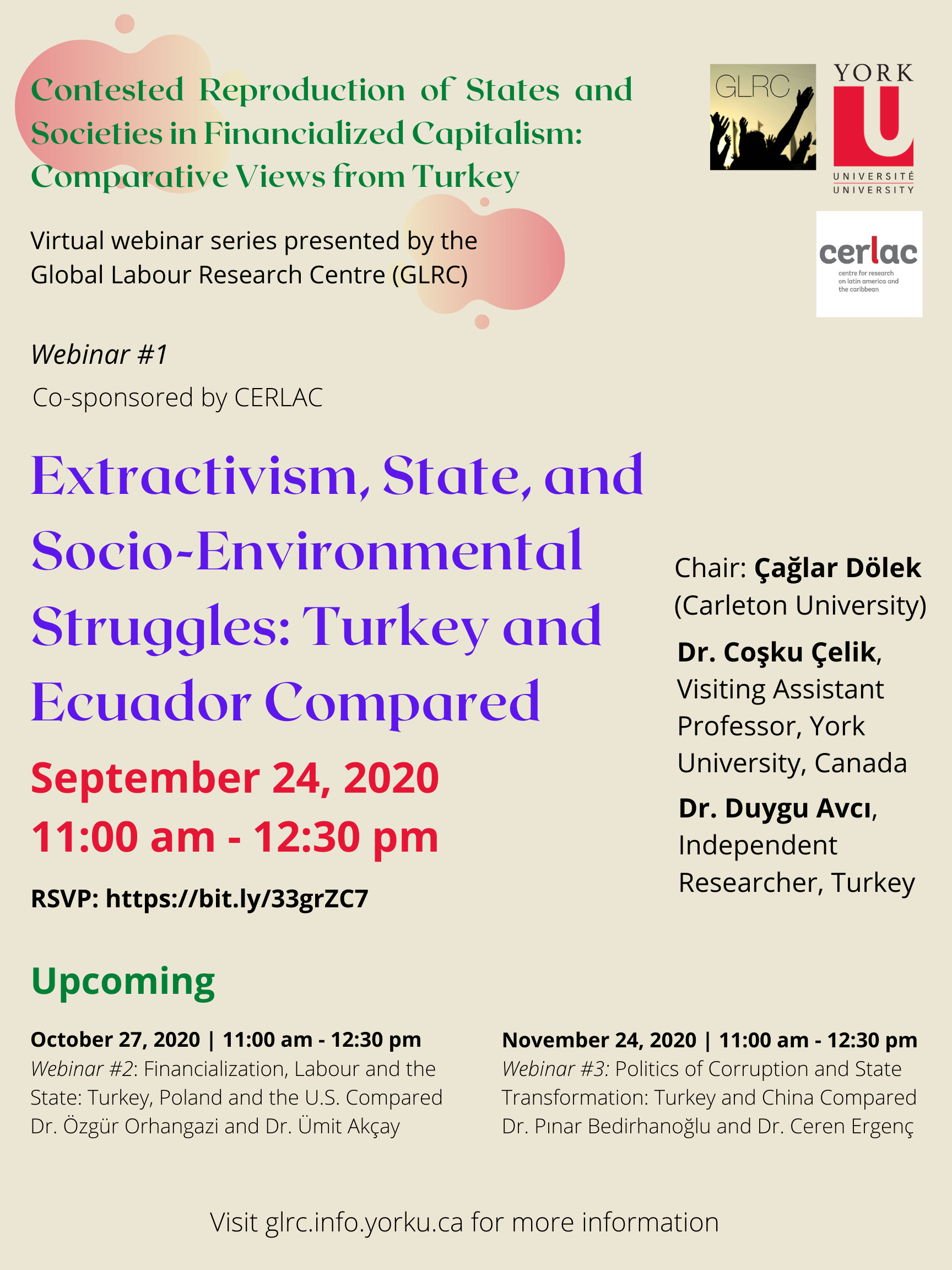 The Global Labour Research Centre (GLRC) is pleased to present Extractivism, State and Socio-Environmental Struggles: Turkey and Ecuador Compared, co-sponsored by the Centre for Research on Latin America and the Caribbean (CERLAC). This webinar[...]
View Calendar
Add