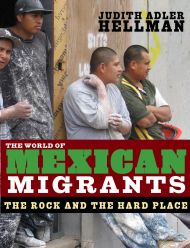 Widely praised as a splendid addition to the literature on the great wave of post–1970 immigration from Mexico—as a result of which an estimated 6 million undocumented Mexican migrants now live in the United States—The World of Mexican Migrants, by acclaimed author Judith Adler Hellman, takes us into the lives of those who, no longer able to eke out even a modest living in their homeland, have traveled north to find jobs.

"A sympathetic, wide-ranging portrait of the lives of Mexicans on both sides of the border."

"Hellman's extraordinarily wide-ranging and painstaking field research not only puts a human face on the abstractions of large-scale Mexican migration to the United States; her work helps the reader understand the big policy issues raised by this population movement."

Listed as one of Choice Magazine's "Outstanding Academic Titles" for 2008.

Read the review in Cambridge Journals

Read the review in The Americas