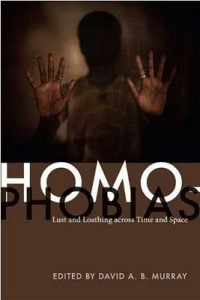 This book provides an insight into the production of discourse around homophobia, and explores the sociocultural and political contexts within which this discourse has been and continues to be produced. The contributors look at the production of homophobic discourse within a variety of contexts, including: the past and present-American Christian churches, Greece, India, the Caribbean, New York City and Indonesia. In this exploration, they aim to reveal the processes behind homophobic discourses and how these processes are intricately connected to nationalism, sexism, racism, class and colonialism. Moreover, they dissect the term “homophopia” and critique its use as a cross-cultural term.

"David A. B. Murray's collection makes an important contribution to queer/LGBT studies by extricating and interrogating the concept of 'homophobia' often implicit in anthropological studies of sexuality and gender. The essays reject essentialized characterizations of homophobia as an intrinsic quality of a culture, region, or nation; in contrast, they explore the institutionally mediated, politically infused, and historically situated set of practices and discourses that constitute homophobias."