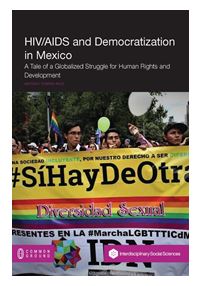 HIV/AIDS and Democratization in Mexico deepens our understanding of globalization, as a complex and multidimensional phenomenon, as well as its effects on the public policymaking process and sustainable human development in Mexico, especially so for the case of HIV/AIDS and health-related policies. It reveals major changes in this policy area and points to a series of democratic openings

in the last few decades, which significantly respond to civil society’s mobilization and human rights activism. The author contends that the emergence of national and international HIV/AIDS policy networks has functioned as a catalyst for the success of pre-existing domestic social groups, in their efforts to advance their legitimate concerns and to assert their rights. In turn, there has been an increasing participation of a broader set of actors in the policymaking process. This has allowed some traditionally marginalized groups, such as sexual minorities, to positively influence policy outcomes. The implications of this analysis go beyond the Mexican case, since it sheds light on the effects of increasingly internationalized policy environments on the domestic or national level. And it provides concrete evidence of the transnational organization and collaboration of civil society groups, and   their concerted responses to the negative effects that recent economic reforms—associated with globalization—have had on basic human rights and the vulnerability of marginalized social groups.

Antonio Torres-Ruiz (PhD., University of Toronto) has taught at York University and the University of Toronto, among other institutions of higher education in Canada and Mexico. His publications include book chapters and single-authored contributions for Latin American Research Review, International Journal, História, Ciencias, Saude, Journal of Latin American Studies, Latin American Politics and Society, Working Papers Series, CIDE, and Teoría Política. And he is working on two projects: A critique of the democratization literature in political science, focusing on human rights and populism; and a Community Based Research project on Afro-descendants in Cuba, fully funded by the Ford Foundation.