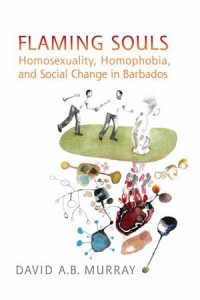 In his new book, David A.B. Murray (CERLAC Fellow, associate professor of Anthropology, and member of the Sexuality Studies Program at York University) explores public discourses focusing on homosexuality and the everyday lives of gay men and 'queens' in contemporary Barbados. His study unravels the complex historical, social, political, and economic forces through which same-sex desire, identity, and prejudice are produced and valued in this Caribbean nation-state. Illustrating the influence of both Euro-American and regional gender and sexual politics on sexual diversity in Barbados, the book makes an important contribution to queer studies and the anthropology of sexualities.

"I enjoyed every last bit of Flaming Souls – it is smart, thought provoking, theoretically sophisticated, and it excellently frames and critiques the Western biases in LGBTQ discussions. As one of the leading ethnographers of men who love men, David A.B. Murray has captured the essence of what it is to be gay or a queen in Barbados – an especially important endeavour given how little there is out there that uses an anthropological perspective to address the intersection of race, class, gender, sexuality, nationality, religion, and age within gay communities of colour. Murray succeeds in avoiding the jargon found in so much cultural anthropology literature, thereby allowing this book to be enjoyed by a general readership and by undergraduate students."

-- A. Lynn Bolles, Department of Women's Studies, University of Maryland