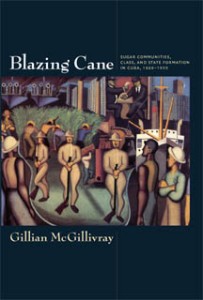 McGillivray examines the development of social classes linked to sugar production, and their contribution to the formation and transformation of the state, from the first Cuban Revolution for Independence in 1868 through the Cuban Revolution of 1959. She describes how cane burning became a powerful way for farmers, workers, and revolutionaries to commit sabotage, take control of the harvest season, improve working conditions, protest political repression, attack colonialism and imperialism, nationalize sugarmills, and, ultimately, acquire greater political and economic power. Not limiting her analysis to the island, McGillivray shows that twentieth-century Cuban history reflected broader trends in the Western Hemisphere, from modernity to popular nationalism to Cold War repression.

“Gillian McGillivray offers a new and original understanding of the history of Cuba from the mid-nineteenth century to Castro’s Cuban revolution by reading that history from the perspective of two sugar communities. She stresses the agency of workers in sugar communities, who asserted demands and engaged with, as they helped shape, the rhetoric of the state and state formation. Blazing Cane is an important contribution to modern Cuban history, and a compelling case for the impossibility of separating the local from the national and transnational in any study.”