CERLAC is proud to host the international graduate student conference on Latin America and the Caribbean at York University. The event attracts students and scholars from Canada, the United States, and beyond. 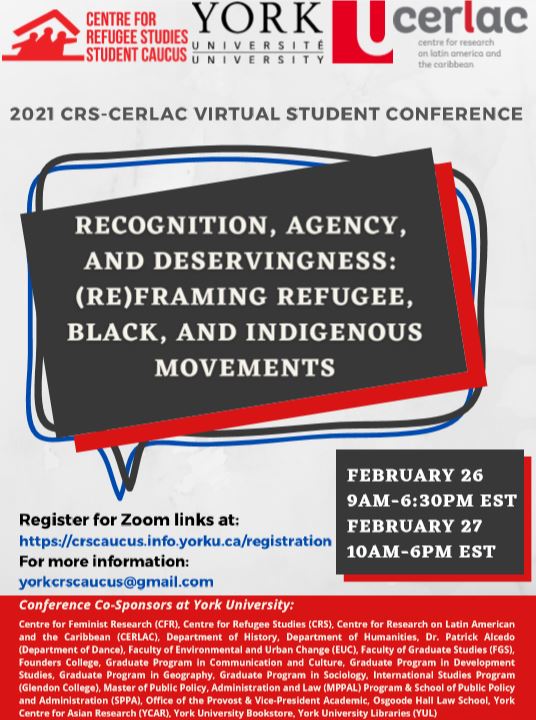 The Centre for Refugee Studies (CRS), in collaboration with The Centre for Research on Latin America and the Caribbean (CERLAC), invites abstract proposals for its 15th annual Student Conference on the theme of “Recognition, Agency, and Deservingness: (Re)framing Refugee, Black, and Indigenous Movements.”

The COVID-19 pandemic has been a time during which movement has become a focus. Moving during confinement has had disparate effects for different populations. Yet, the sense of being constrained has been felt around the world.

Migrants and refugees are amongst the communities most significantly impacted by COVID-19. Being forced to move despite global restrictions on mobility, migrants confront heightened border restrictions and are at increasing risk of exposure to the virus. Physical distancing safeguards have been inadequately implemented (if at all) in refugee camps, immigration detention centres, and temporary migrant worker programs that comprise the essential service sector so heavily relied upon during the pandemic. With limited access to health services, job and income security, and forced to work in unsafe environments, migrants and refugees remain vulnerable. These inequalities are not new; the pandemic has merely exposed and heightened existing conditions of precarity.

Decolonizing the Americas: Methods of Resistance (2016) Decolonizing the Americas – Methods of Resistance is a multidisciplinary conference for graduate students, artists, activists, and independent practitioners working on research concerning Latin America and the Caribbean. Hosted by the Centre for Research on Latin America and the Caribbean (CERLAC) at York University, the conference will feature papers, workshops, performances and discussions, providing an unparalleled opportunity to engage with diverse contemporary aesthetic, scholarly, and transdisciplinary practices informed by decolonial methodologies. We are working with the Journal of Latin American Encounters to offer conference participants the opportunity to publish their presented work in a special issue of the journal to be published at a later date. The 2013 International Graduate Student Research Conference on Latin America and the Caribbean is the third event of its kind. These CERLAC-sponsored conferences, organized by a committee of graduate students, have been held bi-annually since 2008. Reflecting the event’s growing reputation, this year’s call for papers received twice the number of responses, compared to the previous two conferences; the program is close to double the size of its antecedents and integrates a higher proportion of international participants. The conference has truly attained international status – in terms of both participation and renown.
The two-day conference will highlight outstanding graduate student research across a broad disciplinary range, with over 90 student presenters representing 12 Canadian universities, 24 US-based universities, and 7 universities located in the region, Europe and Asia (see list of represented institutions below).

The papers have been organized into 22 interdisciplinary thematic panels in three concurrent streams, encompassing topics including: indigenous politics, North American interventions in the region, diasporic experiences, rural development and food security, literature, performance and politics, popular culture, cultural memory, legacies of violence, education, free trade and globalization, masculinities, gender issues, religion, regionalism, resource development and territorial contestation – among others.
In addition to the student presenters, some 22 faculty members of York University, the University of Toronto, Ryerson University and Trent University will serve as expert discussants. Many dozens of graduate and undergraduate students interested in the region and the themes of the panels will also attend.

This event provides an important professional development opportunity for its participants, graduate students who will receive expert feedback from faculty discussants and engage in intellectual exchange with an international cohort of their peers. Some of their papers may be nominated by discussants for publication in one of CERLAC’s publication series. Dozens of York University students will benefit by presenting papers, by serving on the organizing committee for the event, and by attending and being exposed to a diverse range of accomplished scholarship.

The conference also reinforces York University’s prominence as an international nexus for Latin American and Caribbean studies (LACS), introducing dozens of up-and-coming scholars from around the globe to the university and its outstanding interdisciplinary and international programs, the high caliber work of its students, and the strength of its LACS faculty.

CERLAC and the volunteer student members of the conference organizing committee proudly invite you to attend this event, and welcome your support in whatever form it might take.

Universities represented by participants of the 2013 conference: Over 60 presenters will attend from Latin America, the Caribbean, Europe, the United States and various Canadian Universities, with significant participation by York University graduate students.

An installation and a photo exhibit will also be featured as part of the conference.

Since its founding in 1978, the academic and institutional reputation of CERLAC and York University’s diverse graduate programs have attracted many students from Canada and abroad.

This conference represents an outstanding opportunity to recognize, explore and build upon the work of the current generation of graduate students in all disciplines with an interest in Latin America and the Caribbean.

Over 70 presenters will attend from Latin America, Europe, the United States and various Canadian Universities, with significant participation by York University and University of Toronto graduate students.

A performance piece and a photo exhibit will also be featured as part of the conference.
Since its founding in 1978, the academic and institutional reputation of CERLAC and York University’s diverse graduate programs have attracted many students from Canada and abroad.

This conference represents an outstanding opportunity to recognize, explore and build upon the work of the current generation of graduate students in all disciplines with an interest in Latin America and the Caribbean.