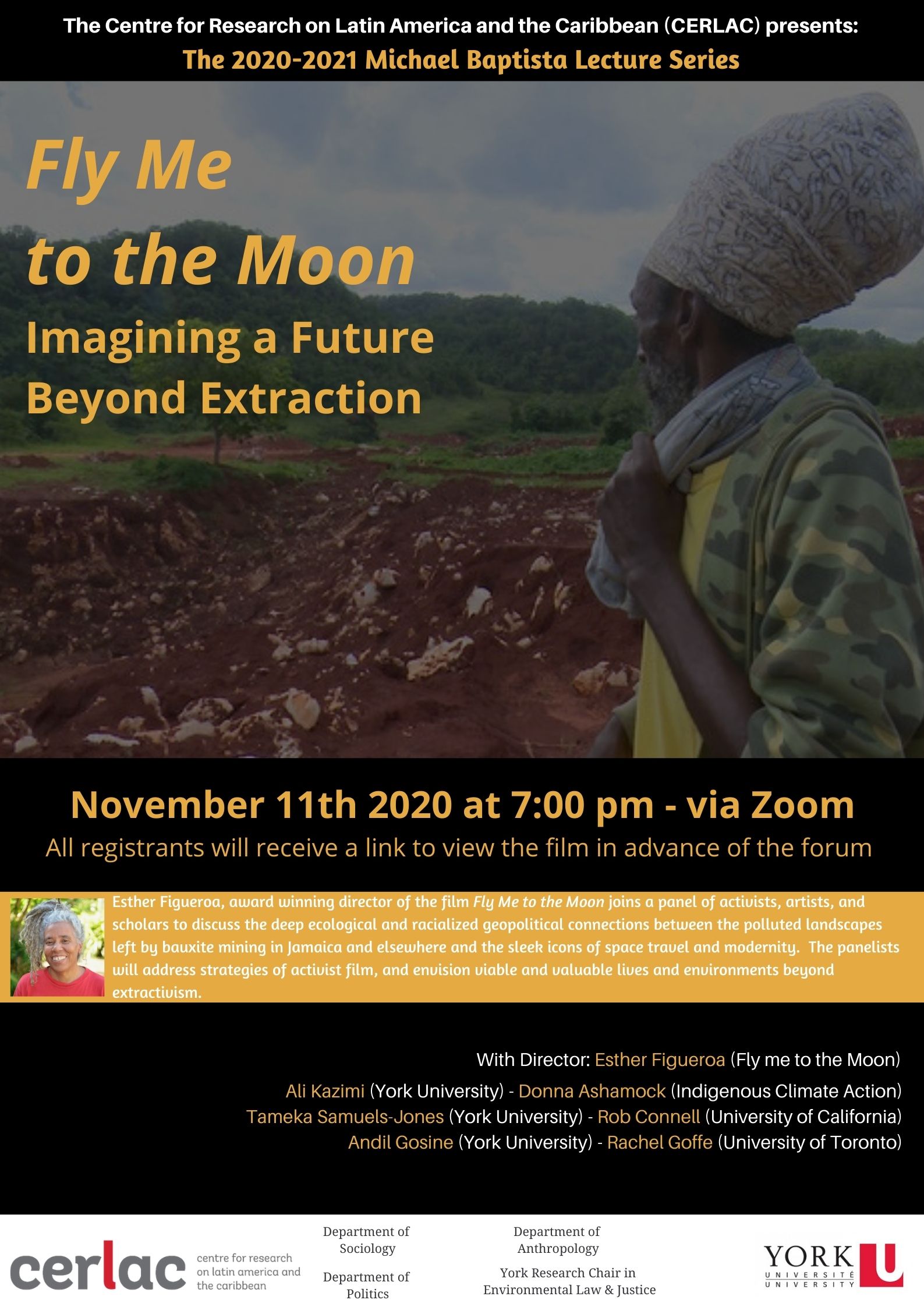 Fly Me to the Moon: Imagining a Future Beyond Extraction

The remarkable Jamaican film Fly Me to the Moon examines the deep ecological and racialized geopolitical connections between the polluted landscapes left by bauxite mining in Jamaica (and other Caribbean countries) and the sleek icons of space travel and modernity. Esther Figueroa, director of the film, joins a panel of activists, artists, and scholars to discuss toxic mining and to envision viable and valuable lives and environments beyond extractivism.

With Fly Me to the Moon director Esther Figueroa, and

All registrants will be sent a link for screening the film in advance of the forum.

About the Baptista Lecture Series:
The Michael Baptista Lecture is the annual public event hosted by the Centre for Research in Latin America and the Caribbean (CERLAC). It was established by the friends of Michael Baptista and the Royal Bank of Canada (RBC) to recognize the areas central to his spirit and success: the importance of his Guyanese/ Caribbean roots, his dedication to and outstanding achievements, and his unqualified drive and love of learning.

As a result of COVID-19, instead of a single large public lecture, CERLAC will host a series of on-line zoom events that pay particular attention to the struggles of Black and Indigenous communities in the region and their transnational links. The theme of the series is: Alternatives: Creating valuable and viable worlds beyond extractive violence How do we envision, inspire and organize social, political, environmental, economic and cultural alternatives in this moment of extraordinary change? We will take up this question across disciplines and around themes of extractivism, migration and reparations for enslavement.

ALI KAZIMI (York University): Is a filmmaker, author and media artist whose work deals with race, social justice, migration, history and memory. With over three decades of documentary filmmaking, Ali Kazimi is a 2019 recipient of the Governor General’s Award in Visual and Media Arts. His films include Narmada: A Valley Rises (1994), Continuous Journey (2004) & Random Acts of Legacy (2016). He served as the Chair of the Department of Cinema & Media Arts, York University where he is currently Associate Professor.

ROB CONNELL (UC Davis): Broad research trajectory examines how racially marginalized societies practicing autonomous governance negotiate conflicts with sovereign states over the political and ecological consequences of resource extraction and climate change. Grounded in an interdisciplinary engagement between African diaspora theory and ethnographically-informed political ecology, Robert’s current project provides a description, interpretation, and analysis of the contemporary social organization and governance of Circum-Caribbean Maroon polities as they bring to bear distinct histories of resistance onto the terrain of political conflict and negotiations with their respective national states over mining. Robert’s parallel research interests include participatory field research methods, oral histories, indigeneity, and the function of utopia and radical imagination in the African diaspora. Robert has published in the Journal of Latin American and Caribbean Anthropology and the Diaspora.

RACHEL GOFFE (University of Toronto): Is a geographer and a licensed architect. Her work is concerned with place-making, livelihood, and how these are shaped through, and in tension with, postcolonial state formation. Her research is sited in Jamaica where she is from originally, and examines the encounter between recent policy to curtail squatting and traditions of Black life that emerged through durable yet insecure possession of small parcels of land. Dr. Goffe is an Assistant Professor in the Department of Human Geography (Scarborough) and the Department of Geography and Planning at the University of Toronto.

ANDIL GOSINE (York University): Is a Professor of Environmental Arts and Justice at York University. He is curator of the current exhibition Wendy Nanan at the Art Museum of Americas in Washington DC -- the first dedicated to a Caribbean woman at the institution -- and author of the forthcoming Nature's Wild: Love, Sex and Law in the Caribbean (Duke University Press).

TAMEKA SAMUELS-JONES (York University): Teaches Corporate Social Responsibility & Sustainability with an emphasis on developing country contexts. Her research interests include environmental crime and regulatory law. Specifically, she conducts research on the role of legal pluralism on regulatory compliance among legally autonomous groups in emerging economies. Dr. Samuels-Jones has received numerous awards for her work in this area including the American Society of Criminology’s Ruth D. Peterson Fellowship award. Dr. Samuels-Jones’ work has been published in various academic journals and presented at international conferences.

DONNA ASHAMOCK (Cree community organizer, Indigenous Climate Action): Has been an Eeyou/Inninew (Cree) community organizer for over twenty years and contributed to the development of Indigenous governance with a self-defined Indigenous community—MoCreebec—in Moosonee and Moose Factory in northeastern Ontario. Donna is a member of the Cree Nation and affiliated with Fort Albany First Nation. Grounded in Cree-centred processes and worldview, she collaborated with fellow MoCreebec citizens to organize innovative community initiatives to support their collective governance and political economy, such as the Cree Village Ecolodge, Community Education and Empowerment Project, and the MoCreebec Constitution. She is a steering committee member of Indigenous Climate Action, co-chair of MiningWatch Canada, and a trustee of Groundswell Community Justice Fund. Her goal is to continue to build upon knowledge and capacity among inter-Indigenous networks in Treaty 9 and international Indigenous and ally networks.