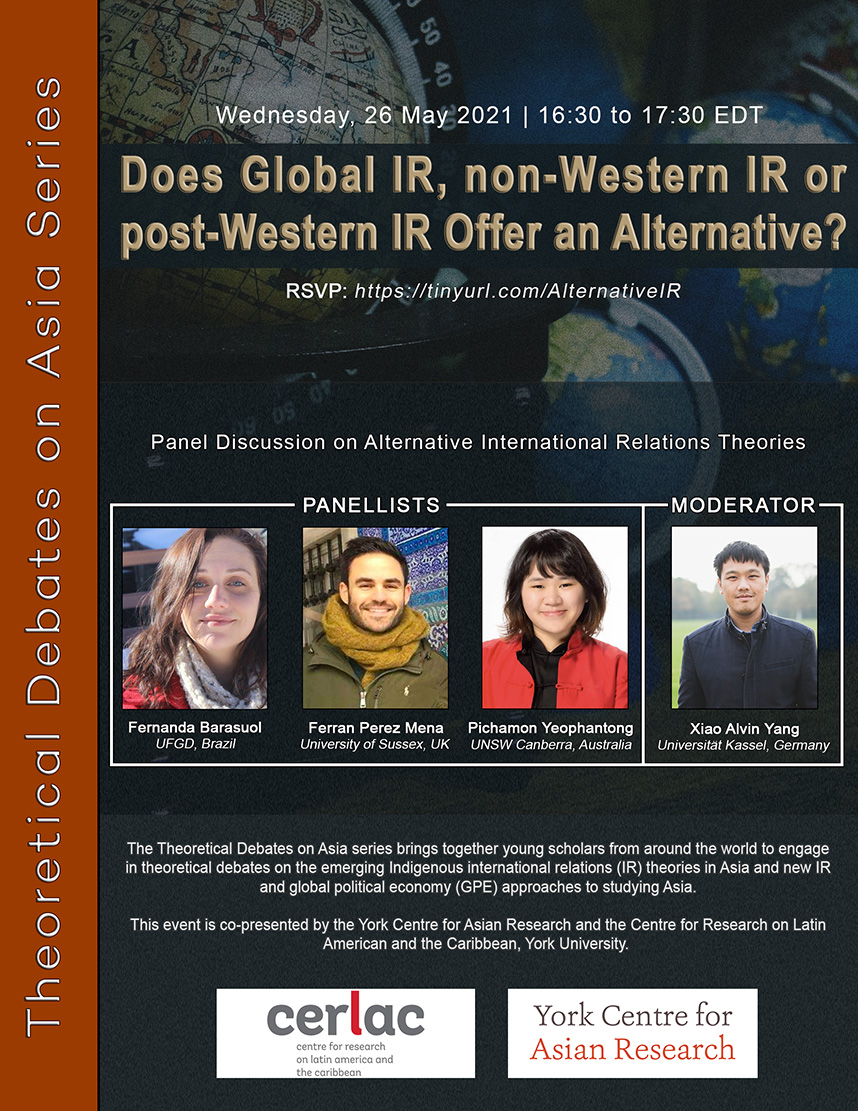 There have been calls for “global IR,” “non-Western IR,” and “post-Western IR” by a number of international relations (IR) scholars in recent years. For example, building upon their previous works on non-Western IR, Amitav Acharya and Barry Buzan call for “global IR”, while Arlene Tickner, Ole Wæver and David Blaney argue for worlding IR. Moreover, Qin Yaqing and Ren Xiao advocate for a “Chinese school of IR,” while Shih Chih-Yu and Navnita Chadha Behera call for a “post-Western IR.”

In light of these competing approaches, this panel discussion will address the central question: Does Global IR, non-Western IR or post-Western IR offer an alternative? We are delighted to have Fernanda Barasuol, Ferran Perez Mena, Pichamon Yeophantong, and Xiao Alvin Yang joining this discussion. They will examine this question from different theoretical approaches.

The first panelist, Barasuol approaches Global IR as a normative project centering around the inclusion of Global South (GS）perspectives, especially theoretical perspectives, into the IR “mainstream”. She points out the difficulties faced by GS scholars in this endeavor (both material and not). Using Brazil as a case, she shows how the configuration of IR academia in Brazil may discourage theoretical development. Moreover, she believes that the exclusion of GS voices not only has consequences on the IR discipline but also on policymaking.

The second panelist, Mena argues the importance of understanding the emergence of the Chinese School of IR through a materialist approach. He contends that this alternative method can enable us to address the fundamental shortcomings of the mainstream literature about the Chinese School of IR, such as a profound cultural essentialism, a presentism and a methodological internalism.

The third panelist, Yeophantong asks whether a unified Asian IR theory is desirable. She argues that Asian IR should not be viewed as a self-contained, monolithic discourse; nor as a purely intellectual enterprise. Accordingly, it is better to describe the bulk of Asian IR approaches as perspectives for making sense of the world. Conceptual pluralism, as such, better serves the original intention of non-Western IR theorists – that is, to bring diversity back into the study of world politics.

The Theoretical Debates on Asia series brings together young scholars from around the world to engage in theoretical debates on the emerging Indigenous international relations (IR) theories in Asia and new IR and global political economy (GPE) approaches to study Asia.

This event is co-presented by the York Centre for Asian Research, York University.

Bios
Fernanda Barasuol is a visiting professor at the Federal University of Grande Dourados (UFGD). She holds a PhD in International Strategic Studies from the Federal University of Rio Grande do Sul (UFRGS), Brazil. She has also been a visiting Researcher at American University, Washington DC (2015-2016). Her research interests include IR theory, Global IR, gender, and the connections between academia and policymaking. Twitter: @febarasuol

Pichamon Yeophantong, PhD, is an Australian Research Council Fellow and Senior Lecturer (Assoc Prof) at the University of New South Wales (Canberra) — Australian Defence Force Academy. A political scientist and China specialist, she has conducted extensive field-based research in the region and is currently leading a multi-year project that explores Chinese economic influence in Southeast Asia. In addition to this project, she has been researching Asian theories of IR and Chinese conceptions of global responsibility. Recently, she has also co-authored a book with Chih-yu Shih et al. on China, relationality and international theory (Routledge, 2019). Previously, Pichamon was a Global Leaders Fellow at the University of Oxford and Princeton University.