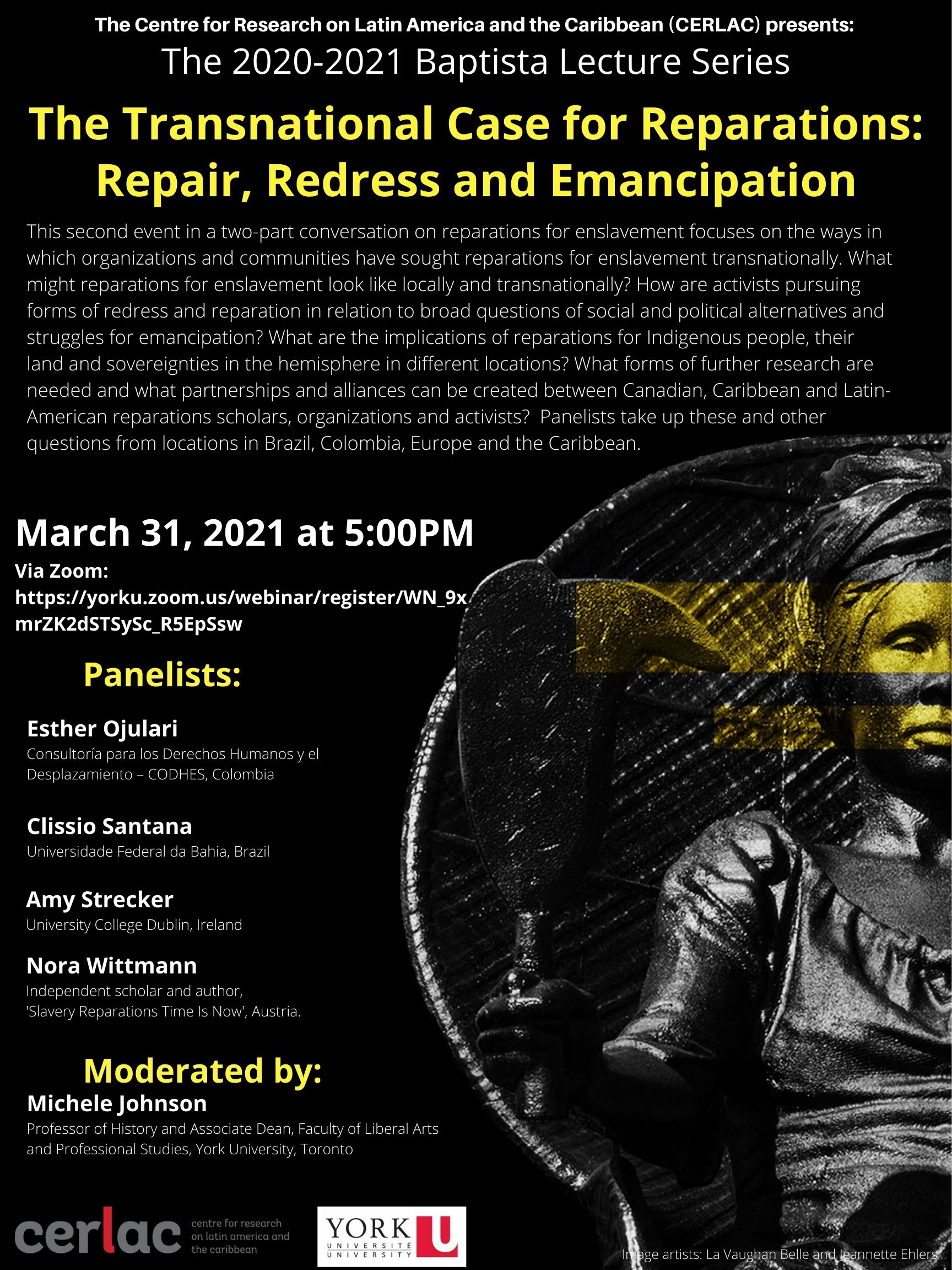 CERLAC presents the fourth forum in the 2020-2021 Baptista lecture series:
The Transnational Case for Reparations: Repair, Redress and Emancipation
This second event in a two-part conversation on reparations for enslavement focuses on the ways in which organizations and communities have sought reparations for enslavement transnationally. What might reparations for enslavement look like locally and transnationally? How are activists pursuing forms of redress and reparation in relation to broad questions of social and political alternatives and struggles for emancipation? What are the implications of reparations for Indigenous people, their land and sovereignties in the hemisphere in different locations? What forms of further research are needed and what partnerships and alliances can be created between Canadian, Caribbean and Latin-American reparations scholars, organizations and activists?  Panelists take up these and other questions from locations in Brazil, Colombia, Europe and the Caribbean.
Panelists
Esther Ojulari
Consultoría para los Derechos Humanos y el Desplazamiento – CODHES, Colombia

All registrants will be sent a link for the webinar
All are welcome!

Michele A. Johnson is Associate Dean Students in the Faculty of Liberal Arts and Professional Studies and a Professor in the Department of History, York University. She teaches a variety of courses which focus on Black people in the Americas, at both the undergraduate and graduate levels. Johnson’s research interests focus on issues of race/racialization, gender relations, labour and cultural productions/performances and have resulted in a variety of publications in areas of Caribbean cultural and social history as well as domestic service in Jamaica and Canada.

Clissio Santana received his Undergraduate from the Universidade Federal do Recôncavo da Bahia. Specialist in Ethnic and Racial studies from the Instituto Federal da Bahia. Master’s in social history from Universidade Federal da Bahia - UFBA. PhD Student at UFBA. Researcher on themes related to slavery, freedom and post-abolition in Bahia during the last decades of the nineteenth century and early twentieth century. School teacher in the Bahia educational system and Faculty of the Centro Universitário UniJorge and Coodinator of the Acervos Virtualis Baianos/ Fundação Pedro Calmon – SECULT – BA.

Dr Amy Strecker is Associate Professor of Law at University College Dublin. Her research focuses on landscape, heritage, environment, and human rights. Amy was formerly involved in a transdisciplinary research project on the impact of colonial encounters on the Caribbean, in which she dealt with the role of international law in confronting the colonial past, specifically relating to land rights, cultural heritage and restitution. Her publications include “Indigenous Land Rights and Caribbean Reparations Discourse” (LJIL, 2017), “Revival, Recognition, Restitution: Indigenous Rights in the Eastern Caribbean” (IJCP, 2016), and “Caribbean Collections in European Museums and the Question of Returns” (with M. Françozo, IJCP, 2017). Amy is currently directing an ERC-funded project investigating the way in which international law facilitates spatial justice and injustice through its conceptualisation of property rights in land.

Nora Wittmann is an independent scholar, holding a doctorate in international law (J.D.) and a master’s in social and cultural anthropology. Member of the scientific council of MIR (Mouvement international pour les Réparations), she is the author of “Slavery Reparations Time Is Now. Exposing Lies, Claiming Justice for Global Survival – An International Legal Assessment” and of the children’s book “Little Afeni and the Cause for Reparations.” A mother of two daughters based in Austria and Jamaica, her publications in scientific and popular journals debunk fundamental legal distortions that serve to undermine the global African claim for reparations.

Esther Ojulari is a South African-Nigerian-British human rights and racial justice activist who lives and works in the pacific coast of Colombia. She is a sociologist with a Masters in Human Rights, and a PhD candidate at  the University of London, where she is finishing a thesis on decolonial and people centred approaches to transitional justice and reparation for the Afro-descendant people in Colombia. She worked as a consultant at the the Anti-Discrimination Unit of the OHCHR in Geneva for 8 years during which time she has worked on several projects accompanying the work of the UN Working Group of Experts on People of African descent within the framework of the UN Decade for people of African descent. She is currently Regional Coordinator in Buenaventura and Northern Cauca for the Colombian NGO, The Consultancy on Human Rights and Displacement (CODHES) where she works with Afro-descendant and indigenous peoples’ organizations on issues of human rights, ethno-territorial rights, collective reparations, peace-building and transitional justice. Esther is a member of the International Coalition of People of African descent (ICPAD) and founding member of the Latin American Coalition for the International Decade on People of African descent (ALDA).