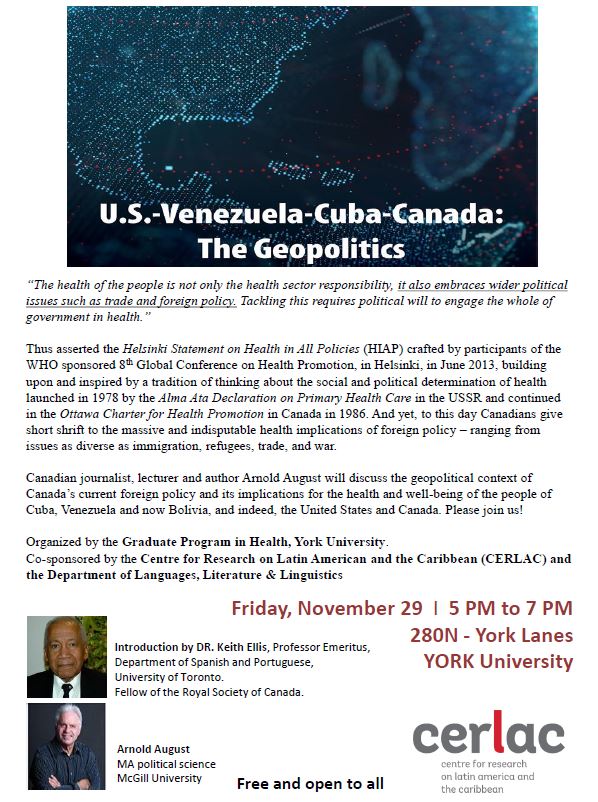 Free and open to all.

“The health of the people is not only the health sector responsibility, it also embraces wider political issues such as trade and foreign policy. Tackling this requires political will to engage the whole of government in health.”

Thus asserted the Helsinki Statement on Health in All Policies (HIAP) crafted by participants of the WHO sponsored 8th Global Conference on Health Promotion, in Helsinki, in June 2013, building upon and inspired by a tradition of thinking about the social and political determination of health launched in 1978 by the Alma Ata Declaration on Primary Health Care in the USSR and continued in the Ottawa Charter for Health Promotion in Canada in 1986. And yet, to this day Canadians give short shrift to the massive and indisputable health implications of foreign policy – ranging from issues as diverse as immigration, refugees, trade, and war.

Canadian journalist, lecturer and author Arnold August will discuss the geopolitical context of Canada’s current foreign policy and its implications for the health and well-being of the people of Cuba, Venezuela and now Bolivia, and indeed, the United States and Canada. Please join us!

Organized by the Graduate Program in Health, York University.

Co-sponsored by the Centre for Research on Latin American and the Caribbean (CERLAC) and the Department of Languages, Literature & Linguistics